Falls of Karnataka are among the Best Honeymoon Places in India

Karnataka is the gateway to South India’s rich cultural heritage and natural beauty. Whether it’s the stunning Abbey falls in Coorg, the luxurious and regal Mysore Palace, the green national parks, beautiful beaches of Mangalore, ancient ruins of Hampi, and yoga centers, the state has it all. Who won’t like exploring this compelling South Indian state, which offers a blend of urbanized crowd aesthetic touch, and legendary valour.

Karnataka is a hot favorite among newly married couples seeking a cozy honeymoon destination. The amazing weather, the beautiful waterfalls, the uber cool hill stations attract a lot of love birds. Among the various mesmerizing tourist spots, the dynamic waterfalls leave everyone speechless. Below is a guide to the stunning waterfalls that Karnataka boasts of for the exuberant honeymoon couples. There are ample things that the state has to offer, including adventure sports, relaxing spa, beach resorts, fishing, bird watching, and other leisurely activities. 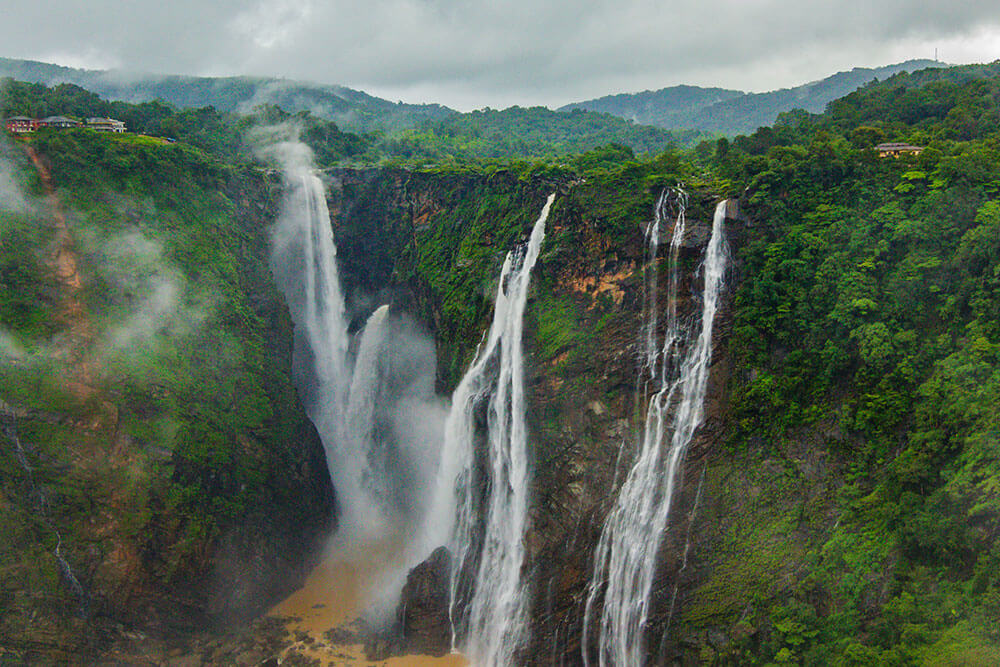 Jog falls is situated about 400kms from Bengaluru, 60 kms from Sirsi, and 105Kms from Shimoga. This is India’s highest plunge waterfall, which is locally referred as “Gersoppa Falls” and “Jogada Gundi”. It’s well connected by roadways and Sagar at a distance of 30Kms is the nearest railway station. It’s formed by the Sharavathi river and breaks down into 4 falls namely – Raja, Rocket, Rover, and Rani. Jog falls are at a height of 830Ft and you need to walk a tapering narrow path to reach the viewpoint, which takes about 45 minutes. Most tourists visit Jog Falls between the months of September to December. You need to spend at least half the day for visiting this splendid waterfall.

The two waterfalls – Gaganachukki and Bharachukki are situated close to the Shivanasamudra island in Karnataka’s Mandya district. Created by the famous river Cauvery, the water runs down 75m gorge and then divides into two separate east and west branches. These gorgeous waterfalls are located 139Kms from the capital city of Bengaluru and 60Kms from Mysuru. The waterfall’s eastern division is referred to as Bharachukki while the western division is called Gaganachukki. Together they are popular among tourists as ‘Shivanasamudra Falls’, which means the sea of Shiva. The Shivanasamudra Falls are ranked among the top 100 best waterfalls all over the world. Close to the falls, you can find Asia’s pioneer hydro-electric power plant. It was constructed in 1902 and functions till date.

The graceful Bharachukki falls witnesses a lot of visitors every year. You need to climb around 200 steps to reach the waterfall, which falls from a height of approximately 69m. The way leading to the waterfall is safely guarded with railings and for the ‘not-so-adventurous’ types there are few benches to sit back and watch the ethereal water flow. During the monsoons, water runs down in enormous volume and on close observation you can spot the shallow parts where water plunges. You can gaze at the mist caused by the high speed water gushing from the cliff by taking a coracle ride. Honeymoon couples can enjoy a refreshing bath under the waterfall while taking all necessary precautions as the water has strong undercurrent and river bed is quite slippery.

You can view the Gaganachukki falls (about 98m high) from the Shivanasamudra watch tower. Visitors cannot approach the bed of the waterfall from the side of the watch tower as it’s fenced. You need to follow another route that passes via the Hazrath Mardane Gaib Dargah. This is the waterfall’s upstream end, which looks fascinating during the rainy season as the water levels swell up.

Another major attraction for newly-weds are the trio of Sri Ranganathaswamy temples. These temples are devoted to Lord Ranganatha, a manifestation of Hindu God Vishnu. The first temple is situated in the famous town Srirangapatna, which derived it’s name from the Ranganath temple. The second Vishnu temple is in Shivanasamudra and was erected during the rule of Hoysalas. The last and third structure is Tamil Nadu’s Srirangam town.

Another place to visit is Bheemeshwari, an eco-tourism destination, which is a breeding ground for Mahseer fish, making it a famous fishing hub. Channapatna is another tourism spot for handcrafted non-toxic wooden toys made of vegetable dyes.

Krishana Raja Sagara Dam is the most widely known dams of Southern India. Also referred to as KRS dam, it was named after Mysore King Krishnaraja Wodeyar IV. It’s constructed over Cauvery river, close to the confluence of the 3 rivers – Hemavathi, Cauvery and Lakshmana Thirtha. This dam is the primary water source for people of Mysuru and Bengaluru city. The 3km long KRS dam offers ample water for irrigation to the farmers of Mandya. Besides being India’s first irrigation dam, KRS also provides power supply for the hydro-electric power station at Shivanasamudra.

Built in the year 1932 by the Wodeyar king, this dam is a replica of the spell-bounding architecture of the past era. With an enormous height of 130ft, the KRS dam has 152 sluice gates. It was constructed by Mysore’s greatest engineering mind Sir M. Vishweshwaraiah, who is popularly called as ‘architect of modern Mysuru’.

Those visiting the place during their honeymoon trip can enjoy the beautiful musical fountains, colorful water bodies, and brightly illuminated gardens with a variety of flowers. This stunning site has been part of many movies and is surely a must visit. This dam lies between Mysuru and Srirangapatna, hence it’s the perfect weekend getaway for Bangaloreans. Besides the dam, the Brindavan garden is extremely good for sightseeing and witnessing the light and sound show. The ‘Brindavan gardens’ are a lovely sight to behold with stunning terrace gardens, beautiful flowers, water fountains, and fresh air. You can visit the place anytime between June to August, as the volume of water swells during this period. The sluice gates automatically open when water reaches 124ft, and you can see enormous streams of water gushing out.